Photography is all about capturing moments in time and preserving them. When your presented with that moment be prepared or loose it. Most photographers will admit, if they are honest, that they’ve missed far to many and will try to be better prepared at any time. Today that is made a lot easier with the advent of cell phones that have reasonably good cameras but these certainly don’t replace a DSLR for quality files but they’re easily accessible to make that capture.

This is one of those moments that came up very quickly and was over with in a couple of minutes.

Recently, on a student outing, we were at a lake location for a sunrise shoot. All the cameras were set up on tripods facing east and everyone was anxiously waiting for their moments to capture the aura of a new day. A steady wind was coming out of the west and as the wind picked up I turned and there was this amazing boiling cloud formation know as mammantus clouds coming over our heads. Alone these are an interesting cloud structure and poised on a broad scene they are very dramatic. Then I noticed all the birds scurrying about sensing an impending storm and higher up the gulls were souring in the air turbulence. I collected my camera in hand and I began to shoot the larger birds with the back drop of the clouds.

The birds were moving very quickly partly due to the winds but also gulls are generally quick fliers. I immediately thought of capturing them as a silhouette, at the altitude they were flying the details were not necessary so I made a setting selection. I always shoot manual so with the ambient light low and by increasing my shutter speed to keep the birds sharp I ended up with a setting of 1/180 to 1/500 sec, f 2.8 and the ISO was already set at 200 for the sunrise. I always check my in camera metering to make sure I don’t blow out any highlights, if there is any danger I shoot on the dark side and bring it back in Lightroom. 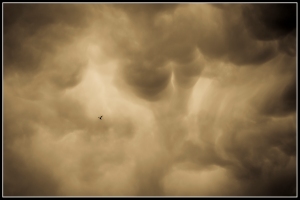 In post production the decisions were almost immediate. There was very little colour so a conversion to B&W was obvious and it was the first step. I took the first image and tweaked it till the clouds were well defined yet the bird remained the darkest point which became the focal point. I saved this as an action and applied it to the 56 images as a base line. The clouds were really quite uniform in brightness so I could make a decision individually as to where a stronger highlight could be placed. The obvious choice would be around the gull but I chose not to be that obvious because in mother nature its more random. In stead I let each images cloud structure decide where the brightest point would be and the bird was secondary even though it was the focal point, bit unusual, but I believe it worked out well.

The last bit of artistic license was to convert them to a deep sepia tone which gives the images a more menacing and intense essence. To finish all the images were taken into FX pro and given a simple frame and a light glow with no blacks, to make sure there was no halo around the birds.  The glow gives the clouds a very nice soft look and deepens the background from the foreground, with a sharp bird detail, almost appearing 3D.